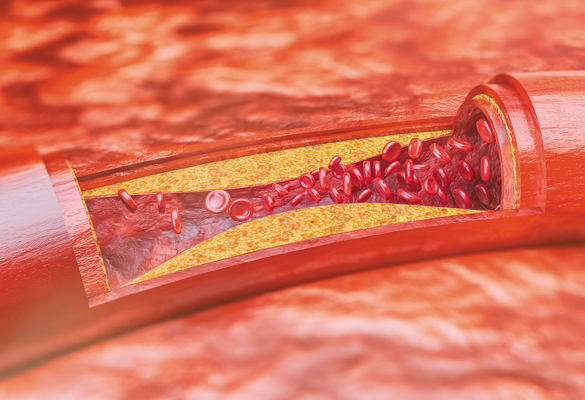 Atherosclerosis is a condition in which there is inflammation in the blood vessel wall with accumulation of inflammatory cells under the mucous membrane leading to a narrowing of blood vessels. Sometimes they break open leading to bleeding in the vessel, clot formation and blocking of blood flow in the area. Typically, atherosclerosis begins in childhood, as a thin layer of white-yellowish streaks within the inner layers of the artery walls (an accumulation of white blood cells, mostly monocytes/macrophages) and progresses from then on. The symptoms of this condition are rarely exhibited in children. This is why early screening of children for cardiovascular diseases and lifestyle correction is best for preventing or reversing disease progression.

Coronary artery disease and block in blood flow to heart muscles and heat attack/ heart failure is the result of atherosclerosis. Atherosclerosis of the cerebral arteries leads to stroke. Narrowing of the coronary arteries which are responsible for bringing oxygenated blood to the heart muscles, can produce symptoms such as chest pain of angina, shortness of breath, sweating, nausea, dizziness, lightheadedness, breathlessness and palpitations. Abnormal heart rhythms called arrhythmias (the heart is either beating too slow or too fast) are another consequence of this condition also known as ischemia.

Carotid arteries supply blood to the brain and neck. Marked narrowing of the carotid arteries can present with symptoms such as a feeling of weakness, not being able to think straight, difficulty speaking, becoming dizzy and difficulty in walking or standing up straight, blurred vision, numbness of the face, arms, and legs, severe headache and losing consciousness. These symptoms are also related to stroke (death of brain cells). Stroke is caused by narrowing or closure of arteries going to the brain, lack of adequate blood supply leading to the death of cells of the affected tissue.

Peripheral arteries, which supply blood to the legs, arms, and pelvis, also experience marked narrowing due to plaque rupture and clots. Symptoms for the narrowing are numbness within the arms or legs, as well as pain. Another significant location for plaque formation is the renal arteries, which supply blood to the kidneys. Plaque occurrence and accumulation leads to decreased kidney blood flow and chronic kidney disease.It is most important to remember that such narrowing of arteries are typically asymptomatic until late stages.

Atherosclerotic lesions, or atherosclerotic plaques, are separated into two broad categories. Stable and unstable (also called vulnerable). The pathobiology of atherosclerotic lesions is very complicated, but generally, stable atherosclerotic plaques, which tend to be asymptomatic, are rich in extracellular matrix and smooth muscle cells. On the other hand, unstable plaques are rich in macrophages and foam cells, and the extracellular matrix separating the lesion from the arterial lumen (also known as the fibrous cap) is usually weak and prone to rupture. Ruptures of the fibrous cap expose thrombogenic material, such as collagen to the circulation and eventually induce thrombus formation in the lumen. Upon formation, intraluminal thrombus can occlude arteries outright (e.g., coronary occlusion), but more often they detach, move into the circulation, and eventually occlude smaller downstream branches causing thromboembolism.

Apart from thromboembolism, chronically expanding atherosclerotic lesions can cause complete closure of the lumen. Chronically expanding lesions are often asymptomatic until lumen stenosis is so severe (usually over 80%) that blood supply to downstream tissues is insufficient, resulting in ischemia. These complications of advanced atherosclerosis are chronic, slowly progressive and cumulative. Most commonly, soft plaque suddenly ruptures causing the formation of a thrombus that will rapidly slow or stop blood flow, leading to death of the tissues fed by the artery in approximately five minutes. This event is called an infarction leading to heart attack/ stroke. This brings us to the importance of keeping our blood vessels healthy and what is possible as an individual to prevent and reverse developments that can result in serious health hazards which originate in such vessels.