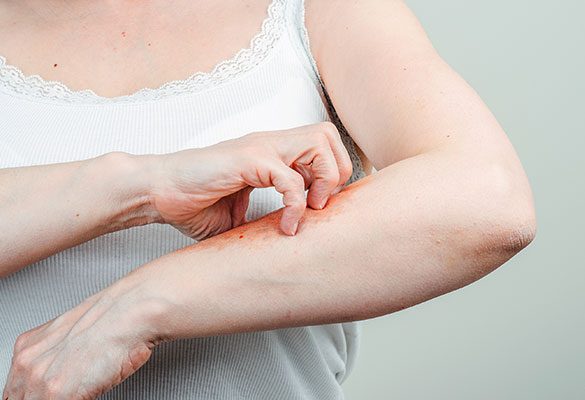 Latest scientific research points out an autoimmune etiology in the pathogenesis of Psoriasis. An autoimmune disease is a condition arising from an abnormal immune response to a normal body part, the patient’s immune system is activated against the body’s own proteins. Nearly any body part can be involved. Often symptoms come and go.

Treatment depends on the type and severity of the condition. Nonsteroidal anti-inflammatory drugs (NSAIDs) and immunosuppressants are often used. Intravenous Immunoglobulin may also occasionally be used. Methotrexate a chemotherapeutic drug with immunosuppression properties is effective in psoriasis and rheumatoid arthritis. While treatment usually improves symptoms they do not cure the disease.

The thymus is a specialized primary lymphoid organ of the immune system situated in the chest in front of the heart. Within the thymus, hematopoietic precursors from the bone-marrow, referred to as thymocytes, mature into T cells. The thymus continues to grow between birth and puberty and then begins to atrophy, called thymic involution. It is degenerated in elderly adults and is barely identifiable, consisting mostly of fatty tissue. Involution of the thymus has been linked to loss of immune function in the elderly, susceptibility to infection and to cancer.

One of the primary functions of the thymus is to prevent autoimmunity through the process of developing central tolerance, immunologic tolerance to self antigens. The thymus is a teaching center for T-cells where they learn important lessons, like “recognize these sets of proteins as part of our own body and don’t attack them, but attack anything you don’t recognize because it must be a foreign intruder”. It allows the immune system to develop what is known as Central Tolerance. When there is a defect in central tolerance, develop autoimmune disease, which is essentially the immune system fighting a civil war against parts of your own body.

Autoimmune diseases are on an increase during the last few decades. The basic reason for this rise is due to the lifestyle changes which include the change in food constituents, overuse of cosmetics and body care products, perfumes, room fresheners and sedentary lifestyle and resulting changes in the hormones and cytokines balance of our body. Cell Activation is a practical solution for regaining a healthy lifestyle with ease suiting the modern lifestyle. The seeds for many aspects of health and diseases are sown years before its expression. So start lifestyle correction at the earliest. Education of our immune cell at the immune cell school, the thymus is almost over by teenage years. So start lifestyle correction as early as possible.